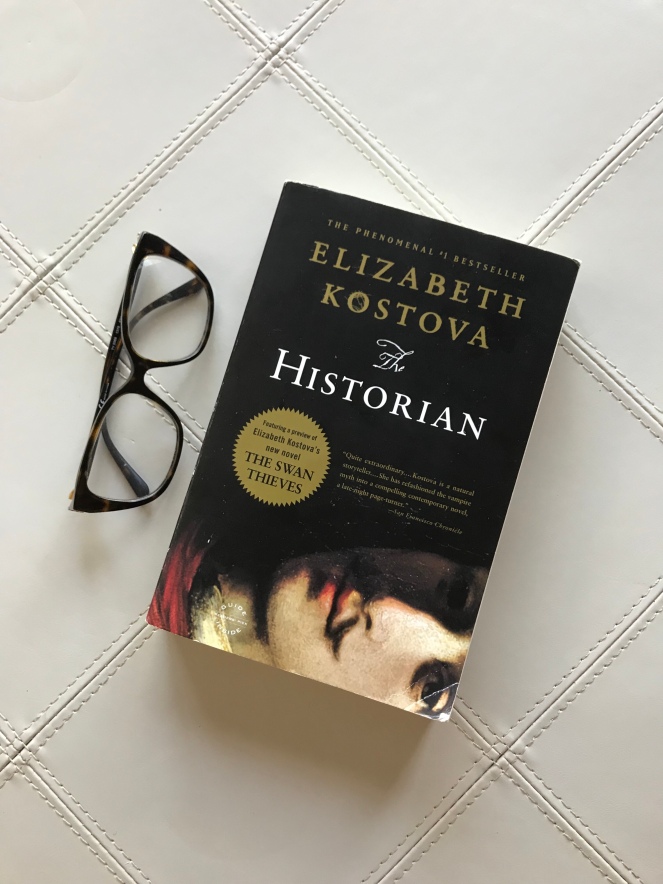 OH MY GOSH. Somehow I accidentally deleted my review. UUUGGGGHH. Hopefully I can repeat it.

The Historian, by Elizabeth Kostova, is a sweeping historical fiction about, well, historians. This epistolary novel takes you on an adventure spanning centuries, hunting for the truth behind the myth of Dracula. If that isn’t enough for you, there’s romance, mystery, and suspense on every page.

The Historian begins when the unnamed narrator finds an unusual book with a carved dragon on the cover in her father’s study. When she asks her father about it, he unravels a tale of intrigue, danger, and suspense that eventually plunges our heroine into her own exciting quest. I know there isn’t a lot of detail to go on here, but I’ve found that too much information can make a book unenticing.

Part historical fiction, part horror, part travelogue, this book is flush with detail and imagination. Kostova is incredibly thorough in her historical research, which is admirable. But the exhaustive history lesson impacts the pacing. One minute, our protagonists are being chased by a potentially undead lackey, and the next we are treated to a 10 page treatise on the historical significance of Hungarian-Romanian relations in the fifteenth century. This particular device reminded me of War and Peace, another novel that is often criticized for its extraordinary attention to minute historical detail at the expense of plot.

Overall, however, the novel works. While Kostova doesn’t veer too far from Bram Stoker’s mythical interpretation of Vlad the Impaler, her prose, characters, and overarching mystery are fresh and engaging. Considering the content and eerie tone, this would be a great October read. 4 Stars

For more book reviews, and to help Pajiba stick it to cancer, check out Cannonball Read 11.