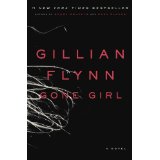 I’ll start with a non-spoilery review, but feel free to leave spoilery comments. I’d really like to discuss the second half of the book.

Gone Girl is, on the surface, the story of a seemingly normal, vaguely unhappy married couple struck by tragedy – the disappearance of the beautiful wife, Amy. Told through the husband Nick’s first person narrative, as well as Amy’s flashback journal entries, the reader sees the portrait of a dissolving marriage, leaving Nick the prime suspect in Amy’s disappearance.

And then something happens. Part Two has a fantastically surprising revelation that shifts perspective and changes the game. I struggled with this novel, but I fought hard, and pushed forward, knowing there would be a decent reveal. I had sort of guessed at the twist early on, but that did nothing to dull the excitement of the psychological mind twists to follow.

I can’t say much else without spoiling the fun, but I’ll leave you with this – Neither character is necessarily sympathetic or likable to begin with, and so for me it was a struggle to continue reading. But I am so glad that I did, because Parts Two and Three were astonishingly insane in the best, most disturbing way possible. 3.5 Stars